Rustic bench seat installed in The Copse in August (and removed September due to anti-social behaviour in the vicinity).

Wokingham in Bloom judging in July

Another busy year in which we undertook several main projects:

The working season was prematurely cut short by the imposition of a nationwide “lockdown” in order to halt the spread of the covid-19 infection.

Work party statistics were mostly improved upon again this year. There was an increase in average attendance for both Saturday and midweek work parties compared to last year with 38 individual members active over the season (up from 34 last year), including four youngsters doing their DofE volunteering with us.

There were only 10 midweek work parties this season equating to 93 ‘person mornings’ and an average turnout of 9.3 members (down from 102 and up from 9.2 last year).

Work began in the autumn at the lower end of compartment 1 coppicing hazel and thinning out holly. This compartment was last coppiced by us 20 years ago, and hazel re-growth has been rather slow. This was the main task for the winter occupying most work parties. 250 hazel were subsequently planted in and around this area along with half a dozen small English oak. Hazel plants financed by a grant from HAWC. Dead hedges constructed around the compartment.

Bramble, willow, small red oak and birch were removed from the area alongside Connaught Avenue in Joel Park in preparation for establishment of a wildflower meadow. This occupied several sessions. Area is to be treated with glyphosate and rotavated by WTC contractors in the spring.

Maintenance was carried out in compartments 3, 6 (last year’s coppice) and the top end of compartment 1, removing bramble and holly re-growth.

We continued clearing laurel and holly in compartment 7 (behind the play area) and a tangle of fallen trees was (mostly) cleared up.

A couple of half sessions were spent clearing the regrowth of willow scrub and brambles on Connaught Avenue in Joel Park.

The hedge laying alongside Jubilee Avenue was completed over several sessions in parallel with the main coppicing tasks with a further 40m of hedge being laid.

The laid hedge alongside “The Bermuda Triangle” (compartment 11) was trimmed down to head height.

The lower footbridge over the ditch between The Copse and Joel Park was repaired.

We also spent some time in compartment 3 clearing up and stacking timber after a large windblown oak tree fell.

The annual nest box survey was once again carried out over several sessions (see separate report).

This winter the WTC groundsman (“Mac”) has kept the paths blown and in good condition and so our involvement with leaf blowing has been minimal this time (one session only). 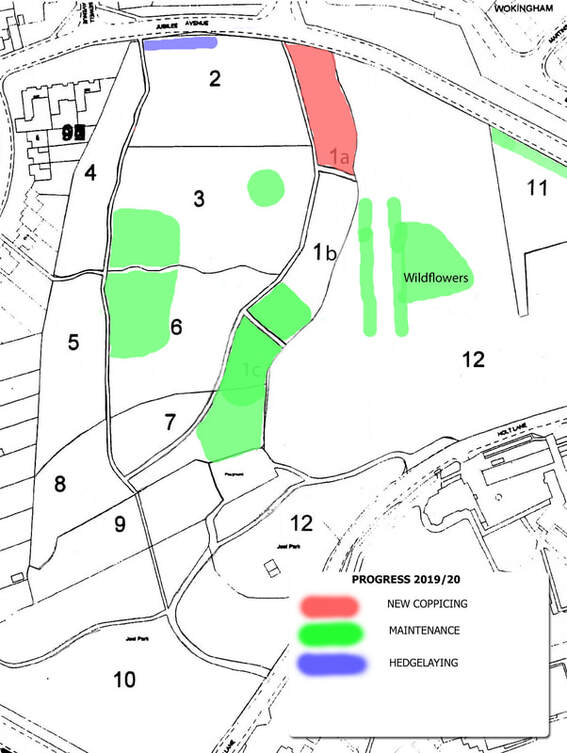