A moth Survey was held in July in the garden of 11 Larch Avenue (which backs on to The Copse). Highlights were: - 64 different species recorded, 197 moths counted (plus approx. 600 water veneer). Results in spreadsheet format have been uploaded to the website.

Repairs were made to both footbridges with rotten end posts being replaced.

Another busy year in which we undertook two major projects, the regeneration of a section of compartment 6, and the laying of a length of hedge alongside The Copse.

Work party statistics were improved upon again this year. There was an increase in attendance for both Saturday and midweek work parties compared to last year with 34 individual members active over the season (up from 26 last year). That’s eight new faces this year.

There were 12 scheduled Saturday work parties equating to 168 ‘person mornings’ and an average turnout of 14 members (up from 150 and 12.5 last year)

There were 11 scheduled midweek work parties equating to 102 ‘person mornings’ and an average turnout of 9.2 members (down from 111 and up from 7.93 last year).

Work began in the autumn in compartment 6 removing holly and coppicing what hazel survived in this neglected compartment. This was the main task for the winter occupying most work parties. Several hundred hazel were subsequently planted in this area along with some small oak and hawthorn.

Maintenance was also carried out in compartment 3 (last year’s clearance) and the top end of compartment 1 removing bramble and holly re-growth.

One session was spent clearing the regrowth of willow scrub and brambles on Connaught Avenue. Two small red oak trees were subsequently transplanted into The Avenue and a medium sized dead read oak felled.

Hedge laying alongside Jubilee Avenue was carried out by small groups lead by JR in parallel with the main coppicing tasks with 40m of hedge being laid. The remainder of the hedge will be laid next winter.

We also spent some time in compartment 2 carrying out maintenance in the form of bramble bashing and tidying up felled timber and brash following a visit from WTC’s tree surgeons.

Towards the end of the winter we spent several work parties clearing laurel from compartment 7 (behind the children’s playground). Some large overgrown hazel in this area was also coppiced and a quantity of new hazel planted.

One session was spent clearing bramble and planting 42m of new hedge alongside the “Bermuda Triangle”. Plants, canes and protection spirals were donated by The Woodland Trust.

A dead hedge was constructed at the main entrance on Jubilee Avenue to restrict the width and deter any potential unwanted access by vehicles. The base of the main hedge was cleared out and the area re-seeded with grass.

The annual nest box survey was once again carried out over several sessions (see separate report).

This winter the WTC contractor (Mac) has kept the paths blown and in good condition and so our involvement with leaf blowing has been minimal this time.

Some temporary strengthening repairs were made to the “top” wooden boardwalk to reduce the amount of “bounce” in the planking. All boardwalks have subsequently been removed and replaced with hard paths incorporating drainage pipes beneath. This work was funded by WTC and carried out by Burrows contractors. 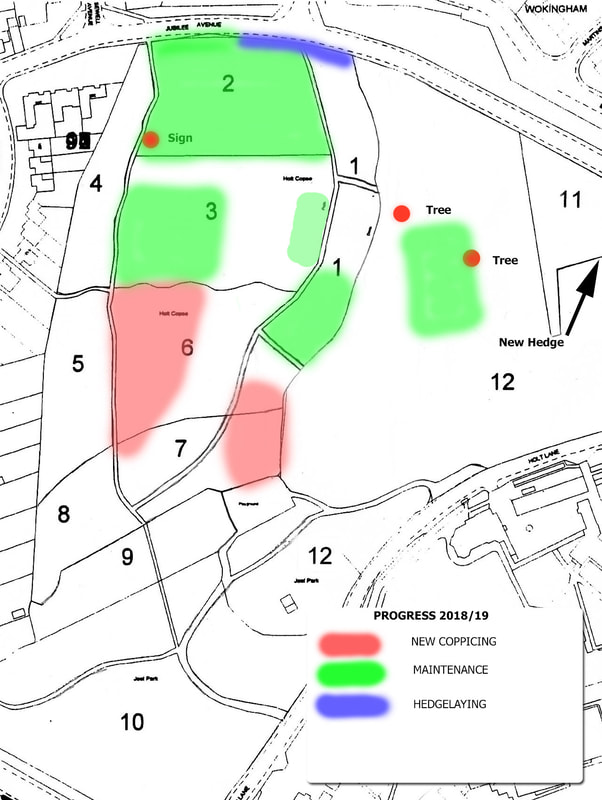