Work began in the autumn in compartment 1, tidying up the debris from a large mature oak tree that fell in the spring. Four new oak trees were planted in compartment 1 as replacements for the tree lost.

Coppicing work continued in compartment 1 to provide poles and binders to be used later when laying the hedge along Jubilee Avenue.

One session was spent clearing the regrowth of willow scrub and brambles on Connaught Avenue.

Most of the remaining work parties were spent regenerating a section of compartment 3 (coppicing hazel, removal of holly and bramble) and laying the hedge along Jubilee Avenue.

Several hundred (>350) hazel whips were subsequently planted in the cleared area of compartment 3. Spare whips were also planted alongside the main path in compartment 4.

The hedge laying was a great success and proved to be very enjoyable with 60m of hedge being laid. Most volunteers were involved at some point and gained practical knowledge of use of a billhook for laying the hedge as well as preparation of poles and weaving of binders to strengthen the hedge. Feedback from the local community has been extremely positive.

We also spent time in compartments 3, 6 and 2 carrying out maintenance in the form of bramble bashing and actions to cut back any holly re-growth.

The annual nest box survey was once again carried out over several sessions.

Volunteers also took part in the RSPB “Great Garden Birdwatch” lead by IH. Results can be seen on our facebook page.

A litter pick was organised to coincide with the “Big Wokingham Litter Pick” weekend. Several bags of rubbish were collected.

Leaves were blown from the footpaths to reduce the amount of rotting leaf litter that usually builds up through the winter. This winter it would seem that WTC contractor (Mac) has kept the paths in good condition and so our involvement has been minimal this time.

Bluebell seed gathered in the summer was scatted in bare areas of The Copse.

Some temporary repairs have been made to the wooden footbridges over the ditch as rotting timbers have begun to pose a potential hazard. More work will be required over the coming spring to finally replace all the rotten timbers.

A vandalised nature watch sign has been removed. This will be repaired and re-installed within the next few weeks. 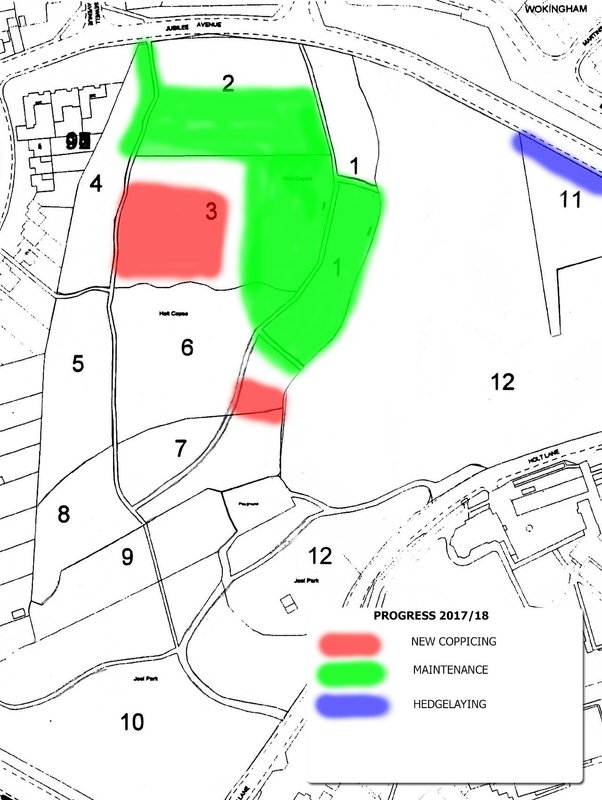 STATISTICS
Work party statistics were improved upon again this year. There was an increase in attendance for both Saturday and midweek work parties compared to last year with 26 individual members active over the season.

There were 14 scheduled midweek work parties equating to 111 ‘person mornings’ and an average turnout of 7.93 members (up from 87 and 7.25 last year).

This equates to a total of 261 cups of tea/coffee and a staggering 522 biscuits.
Powered by