WORK CARRIED OUT
Pre-season activities were arranged during the spring/summer to prepare for the new path works and make good afterwards. The new display board was also installed adjacent to the children’s playground. MS also arranged small work parties to water newly planted trees during the dry summer months.

Work began in the autumn in compartment 1, clearing holly and coppicing with the help of the Emmbrook Beavers (and parents) who helped out on two work parties. Compartment 1 became the main focus of our coppicing and clearance efforts throughout the winter.

The Beavers also helped us to rake the new footpath and re-distribute some of the material to make good other sections of muddy path.

Two very large holly trees in compartment 1 were skilfully felled for us by Richard Gresswell from local company Gressgardens.

Several hundred hazel whips were subsequently planted in compartment 1. Spare whips were also planted to fill gaps in areas of compartments 3 and 6.

Some of the fruiting trees heeled in last season were transplanted along the ditch edge of compartment 1. The oak saplings planted out in our allotment last year were also attended to.

We also spent time in compartments 2, 3 and 6 performing maintenance in the form of bramble bashing and actions to cut back any holly re-growth.

A short stretch of holly and scrub was cleared from alongside the main path on the Copse Drive side on a suggestion from Duncan Fisher (WBC).

Three new Nature Watch signs were installed and the sign nearest the main entrance was replaced with a new double width sign. Unfortunately due to some ill-timed vandalism this new sign had to be re-installed in the following week. The LNR notice board on Jubilee Avenue was vandalised at the same time but was very kindly repaired and re-installed by Paul Lawrence from local fencing contractor AWGS fencing. The surveillance camera has since been re-instated.

The annual nest box cleaning and survey were carried out over several sessions.

Repairs were made to the footbridge over the ditch adjacent to compartment 1.

Repairs were made to the display board to improve weather sealing against water ingress. UV film was applied to the clear polycarbonate in an effort to reduce fading of contents due to sunlight.

Leaves were blown from the footpaths in order to try and reduce the amount of rotting leaf litter that usually builds up through the winter. Our actions along with those of WTC contractor (Mac) has kept the paths in good condition over the winter months.
​

​WORK PARTY STATISTICS
There had been an increase in attendance for both Saturday and midweek work parties compared to last year with 30 individual members active over the season (up from 25 last year).

There were 12 scheduled midweek work parties equating to 87 ‘person mornings’ and an average turnout of 7.25 members (up from 60 and 5.5 last year). 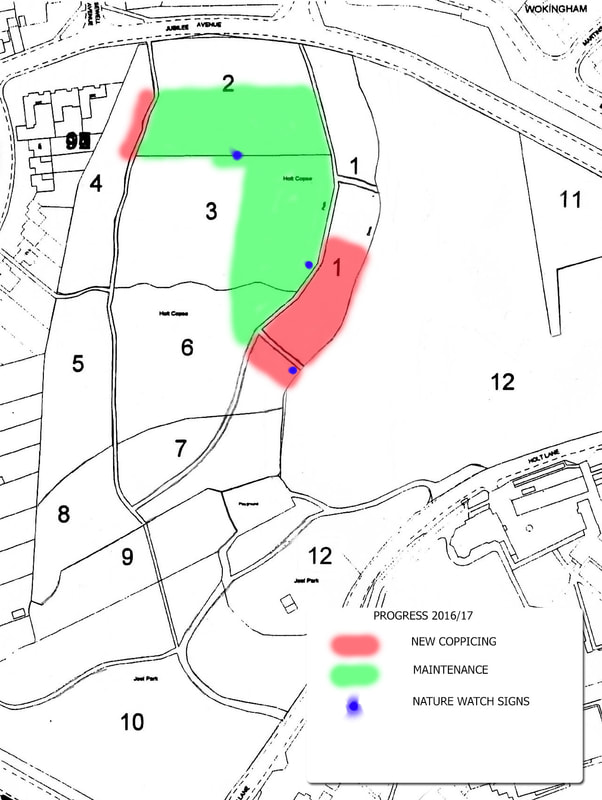