WORK CARRIED OUT
The season started with a scrub clearance session along Connaught Avenue before work began in earnest where we left off at the end of last season removing many large holly trees and bramble from compartment 3. On completion of work in compartment 3 we moved along to compartment 6 where the holly and bramble clearance continued.

Several hundred hazel whips were subsequently planted in compartments 3 and 6. Whips were also planted to fill gaps in other compartments.

We also spent time in compartment 2 keeping the bramble and holly re-growth under control and in compartment 1 clearing up the debris from a fallen elder and severely lopped dead oak tree.

In Connaught Avenue two dead red oak saplings were removed and two new specimens planted at the top end of the avenue.

The midweek team re-instated two of the vandalised Nature Watch signs, removed the old information board and dismantled and disposed of the old rotting viewing platform. A number of fruiting trees were planted out in The Copse and the oak saplings planted out in our allotment last year were also tended to.

The annual nest box cleaning and survey was carried out over several sessions.

Leaves were regularly blown from the footpaths in order to try and reduce the amount of rotting leaf litter that usually builds up through the winter.

WORK PARTY STATISTICS
There had been a very slight decrease in attendance for both Saturday and midweek work parties compared to last year with 25 members active over the season (up from 22 last year).

There were 12 scheduled Saturday work parties equating to 142 ‘person mornings’ and an average turnout of 11.8 members (down from 164 and 13.6 last year)

There were 11 scheduled midweek work parties equating to 60 ‘person mornings’ and an average turnout of 5.5 members (down from 73 and 6.1 last year). 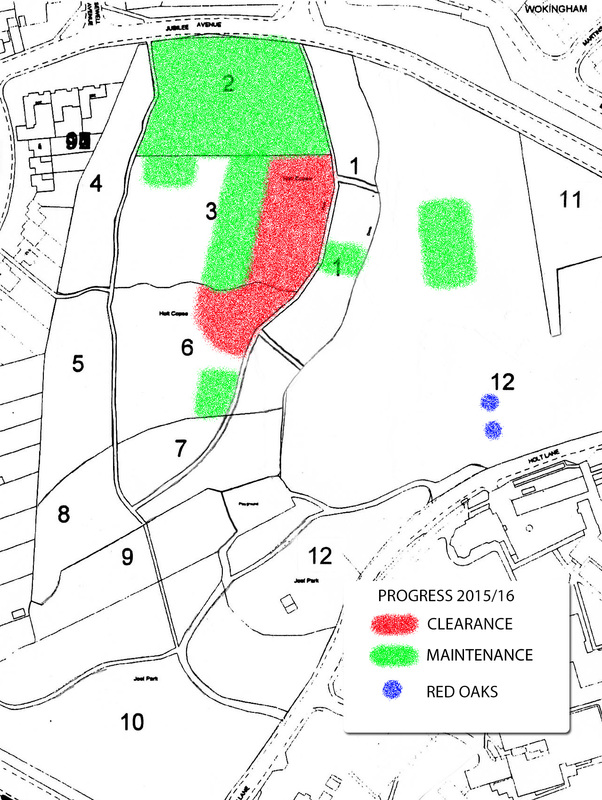